Well another day of Raiders has come and gone, it was really good fun and everyone seemed to be enjoying themselves which is great. 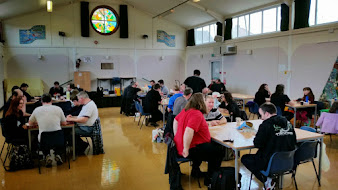 There were plenty of new and old games being played with a lot of new faces coming along which was also fantastic. You can find pictures of the day in the Raiders Gallery. I started off playing a couple of games of King of New York which is a stand alone follow up to King of Tokyo. The difference here is now the scoring has drastically changed with players vying to control one of two scoring cards that award points or by going into Manhattan and pushing their luck staying in to score points and gain energy. In addition there is now buildings to smash which can reward you with points or health or energy but destroying buildings attract the military that may then fight back if you roll certain symbols. The additions to this game make it much more enjoyable to me than it's predecessor and adds a little bit of strategy into the mix. A really fun game that is still light enough to introduce new people but with enough there to still be enjoyable for more experienced players. 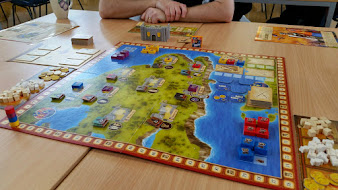 Next up was Lancaster players are supporting the new King and trying to prove themselves to be the most powerful lord. You start with some small value knights to take actions but these can be upgraded or new ones obtained through various actions. You can increase the size of you castle which then enables some permanent actions you can use every turn. Players can also vote on new laws which help score points towards your power, you can increase your vote by attracting nobles to your table by actions. Also you can send your knights to France to assist in the battles over there, this can gain decent rewards if the battles are won and you are the highest contributor. There is a lot going on here and plenty of strategic choices to be made, which fits well with the theme of the game. I found this to be very enjoyable, not too long to play and certainly on my radar to get another game of in the future. 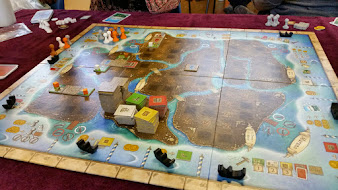 I was then persuaded to setup Murano during which I foolishly left the empty box on my chair whilst getting things on the table then promptly sat on the box !!!

. Murano is a kind of Rondel game, where the Rondel is around the edge of the whole board and by moving Gondolas around you get to take the actions. Players attempt to build Glass Factories, Tourist Shops and Palaces in order to score points. Also players can obtain characters who potentially score them points based on meeting their requirements on the islands, you also need to have in place a Gondolier to transport the character to the scoring island. There are numerous actions players can take:  Create buildings to place later, take money, sell goods to shoppers on the islands, making glass but this is unpopular so costs VP to take the action. There is a lot going on here with some very tough choices to be made, money is needed for most actions and can be in short supply. Getting characters early helps you focus on what to build where as you try to meet its end game scoring. The special buildings provide additional cards that break the rules in some way to aid your ability to complete your actions or scoring. I really enjoy this game and came a reasonable second this time, at least proving to myself that I have gotten some kind of handle on playing one of my games 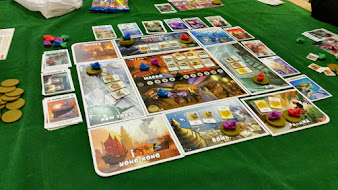 To finish off, after quite a bit of faffing but then we are gamers

, I broke out Cargo Noir. As with all of Days of Wonder games the components are first class, colourful boards, beautiful pieces, excellent cards and a well written rulebook. Each players represent a family of smugglers the aim is to amass the most Victory points (in the form of cards representing various assets - Dive Bars, Yachts, Night Clubs etc). To purchase the VP cards each player must place their ships in a port and bid for the goods available there, if they are successful they get all the goods. To win a bid you must be the only player left bidding in that port at the start of your turn otherwise you either have to increase your bid or withdraw. In order to purchase cards you trade in your goods, upto 9 of the same or upto 9 different, you earn differing amounts depending on which option. The amount of cargo you can hold is limited at the start but you can buy VP cards that increase your storage, as well as VP cards that increase your fleet and a final one that allows you to gain coins when you withdraw from a bid. Finally there is the port of Macao where there is a Casino where your ships earn $2 or the port where for each ship placed you can swap a trade good with any located face up or take one at random from the bag. This is a quick game to learn and quick to play whilst providing for a bit of strategic play. Really fun little game, not deep but a challenge none the less. I did risk the fabric of the universe once again by getting a decently large score and winning!!!

It is with regret that, for only the 2nd time in our 12 year history, we will be forced to raise the ticket price to £4.00, we hope you agree that this still offers value for money for a whole days gaming.
As always your support over the last 12 years has been much appreciated, it is our hope that we can repay that continued support by continuing to run Raiders for the enjoyment of all.

Just a big thankyou to everyone who attended our latest event and helped make it yet another fun day of gaming.